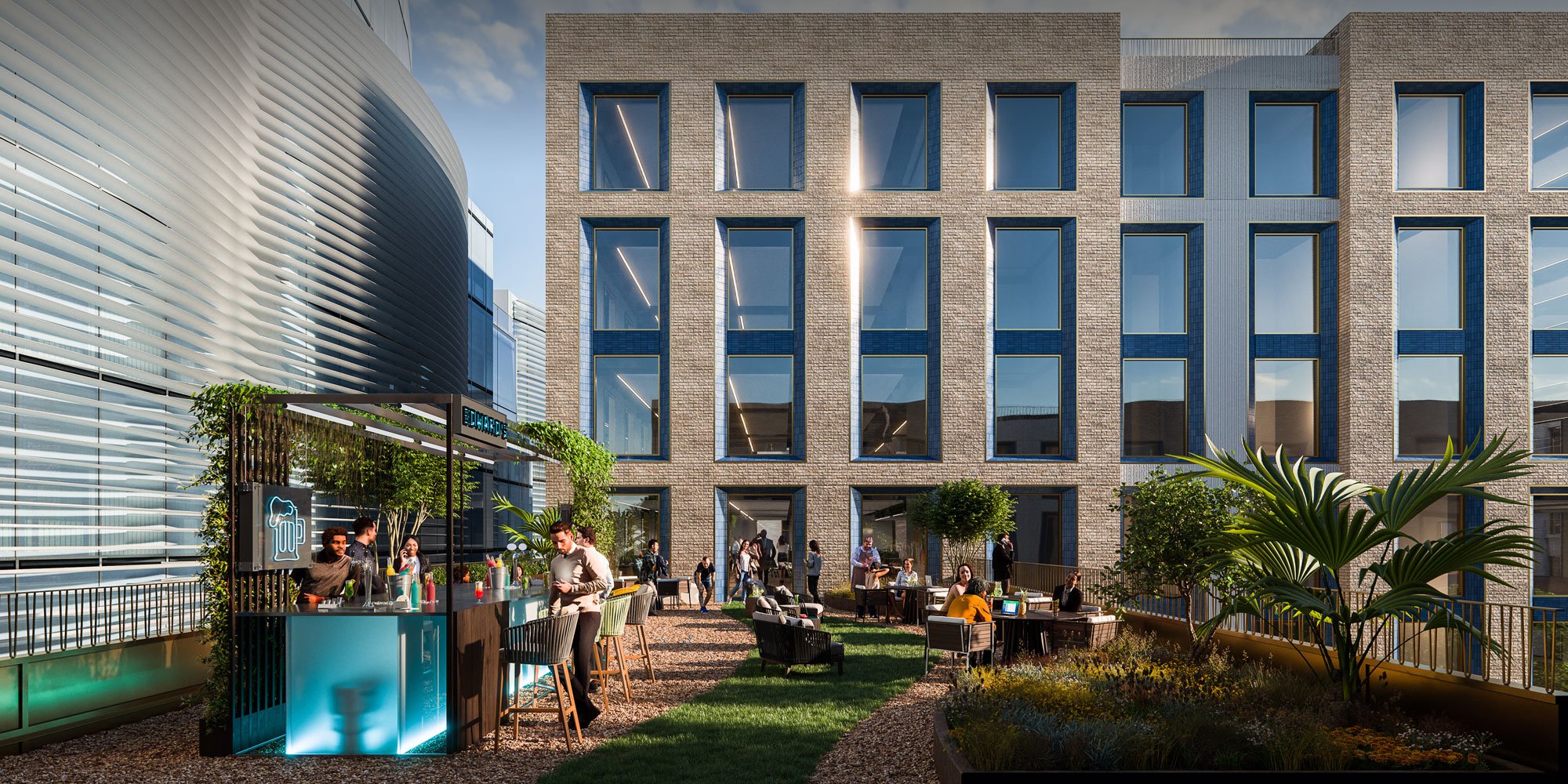 Our development will introduce ground-breaking ways to improve the air quality in and around the site.

Developer First Base has ordered the use of antibacterial and air purifying paints which will benefit residents and occupiers as well as painters and decorators, as the materials are free of VOC emissions. The paints work by absorbing CO2 from the environment in their carbonisation process which leads to cleaner and more climate-friendly spaces.

The average reduction of particulate matter near a tree is between seven and 24 per cent, according to a study by The Nature Conservancy, and large, healthy trees are the most effective at improving local air quality.

A diverse mix of mature specimen trees will give the public games garden an arboretum feel year-round and four species of disease-resistant Elms will provide shade and shelter to Mighell Street, which will be reintroduced with the development.

Buildings within the development will feature 15,000 sq ft of green roofs, the area equivalent to five tennis courts, comprised of sedums, wildflowers and other plants which will absorb rainwater and provide better insulation. Habitat features such as hibernaculum and stripped tree logs will also be installed to attract invertebrates.

To support local biodiversity, developers First Base also plan to install 20 bird boxes to encourage nesting of Great Tits, Blue Tits and House Sparrows in the city and imbed 67 different plant species sourced from a British nursery throughout the development.

Landscape architect, Rosie Sargen of SpaceHub, commented:
“We have carefully selected a range of resilient species, for example, Brighton is famous for its uses of Elm trees to bring shade, shelter and importantly contribute to cleaner air.”
Steve Eccles, project manager at First Base, said:
“Improving air quality is a big priority in urban locations and that is why we will deliver air purifying paint, new trees, shrubs and green roofs to make a positive impact around Edward Street Quarter. Keeping healthy and staying well has always been important, however, Covid-19 has brought this to the forefront of everyone’s minds. We are pleased to be leading the way at Edward Street Quarter so that our community will work and live in a safe and healthy environment.”
The mixed-use development will be built with a target to achieve a BREEAM Excellence rating, the globally recognised sustainability assessment for buildings.
Other articles
News Meet the residents helping to build Brighton’s newest neighbourhood
View Article
Book a show home viewing
Please enter your details to book a viewing of our new show home. Your details will be passed on to our sales agents, who will contact you to arrange an appointment. By completing this form you agree to being contacted by them and agree to our terms and conditions.